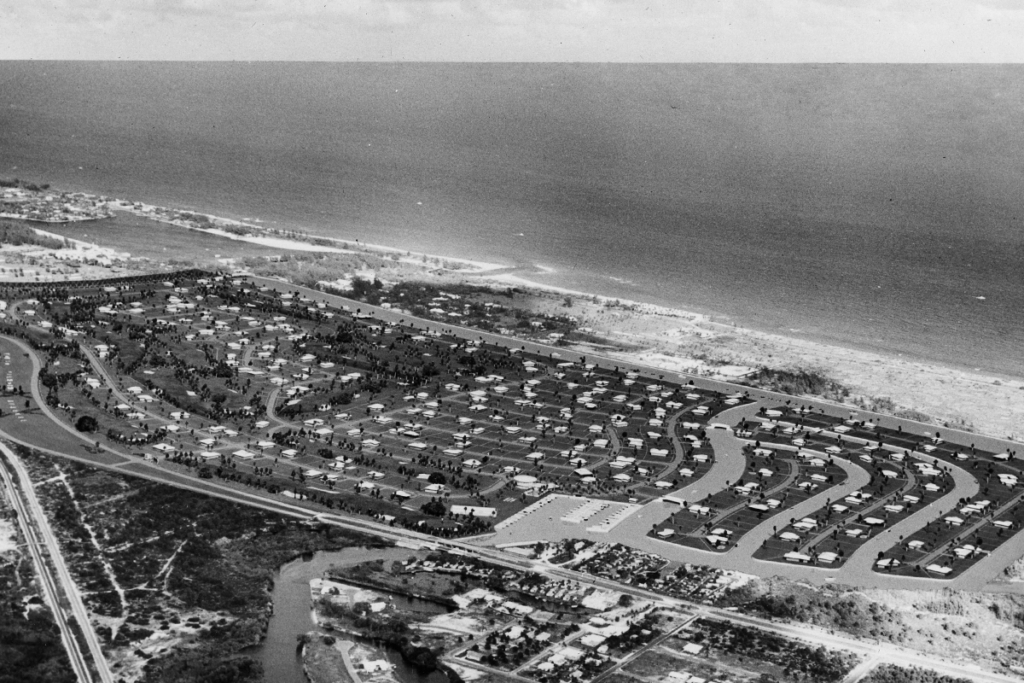 Over a half-century has passed since Arthur Vining Davis’s vision for a prestigious and luxurious community unlike any other, became a reality. In 1958 he was Chairman of the Aluminum Company of America and was a genius who had done more to develop the production and use of aluminum throughout the world than any other individual. At the time he had a personal need for cash and decided to sell off part of his estimated 100,000 acres of land holdings in Florida. For this purpose the Arvida Corporation was formed, the name Arvida being an acronym for Arthur Vining Davis. Arthur Vining Davis, a true business titan, was diminutive, kindly, gentle and smiling. He took pride in the development of Royal Palm Yacht & Country Club. He dined, danced and beamed at the Club’s Inaugural Commodore’s Ball March 19, 1960, in honor of Milton N. Weir, Jr., the Club’s first Commodore.

Milton N. Weir was named President of Arvida. Mr. Weir had been a Gulf Oil Corporation executive, and then a realtor in Pompano Beach. He participated with Mr. Davis in the organization of Arvida in 1958. Mr. Weir was a Yale graduate, a good businessman, pleasantly correct, well spoken, highly ethical, strong minded but not disagreeable, and thoroughly committed to doing things according to the highest standards. This was manifested in Royal Palm Yacht & Country Club by stringent architectural and building specifications. These were set high, so much so that some builders protested they could not build and then sell at competitive prices. Utilities were underground. All roofs were to be white. Lot sizes were larger than customary in other comparable developments. Strict owner obligations were established by the Arvida controlled Royal Palm Improvement Associations. 723 home-sites were originally offered, later redesigned to a stated 742. 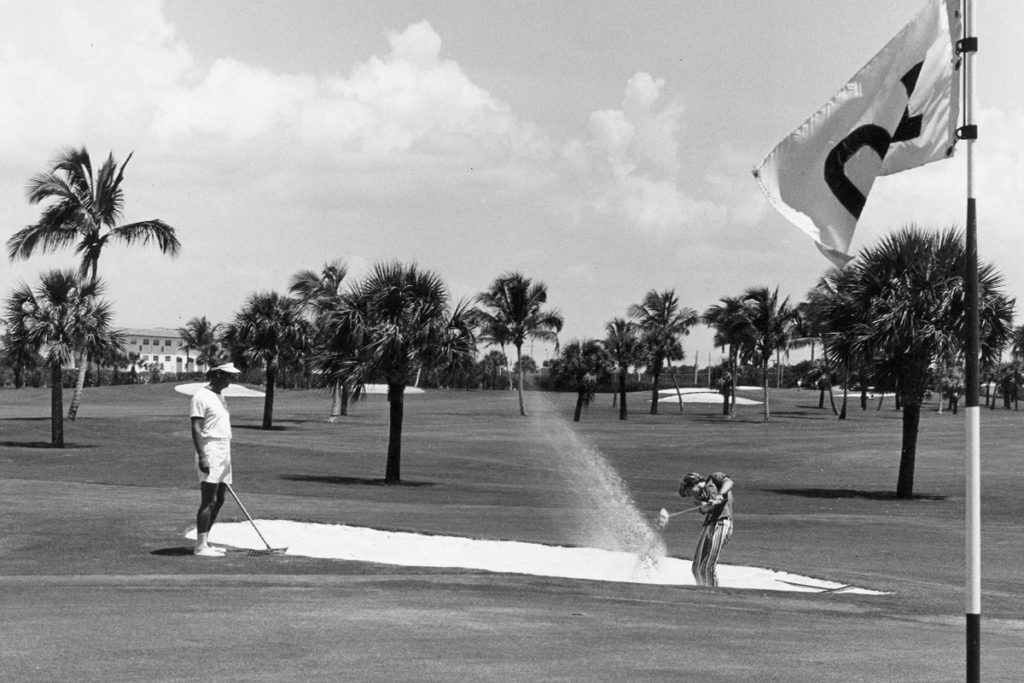 The first land tract selected for development and sale was considered the jewel of the vast Arthur Vining Davis Florida holdings – the approximately 450 acres that became Royal Palm Yacht & Country Club. The sight embraced a nationally renowned polo field that was a focal point for Palm Beach society, with grandstands and stables for an overnight housing of polo ponies. Also, there was a well kept nine-hole golf course, frequently used by Tommy Armour and hotel guests to whom he was giving lessons.

The entire area was an enclave that could not be encroached upon, being bound on the North by the Boca Raton Hotel and Club; the East by the Intracoastal; the South by the Hillsboro River; and the West by Federal Highway. Why was this area selected over other land holdings? Because Davis believed it could raise the largest amount of money in the least amount of time.

It was on March 21, 1959 when the ground was first broken at the site of what would become Royal Palm Yacht and Country Club, which was organized as a Club owned by Arvida, with ownership of a lot or home in Royal Palm a condition for membership The initiation fee was $100.00. Lot purchase arrangements provided that ownership and operation of the Club could subsequently pass to the members whenever 500 members were obtained. Secondly, a large and painful tax problem is said to have sparked the decision to form the new real estate development. 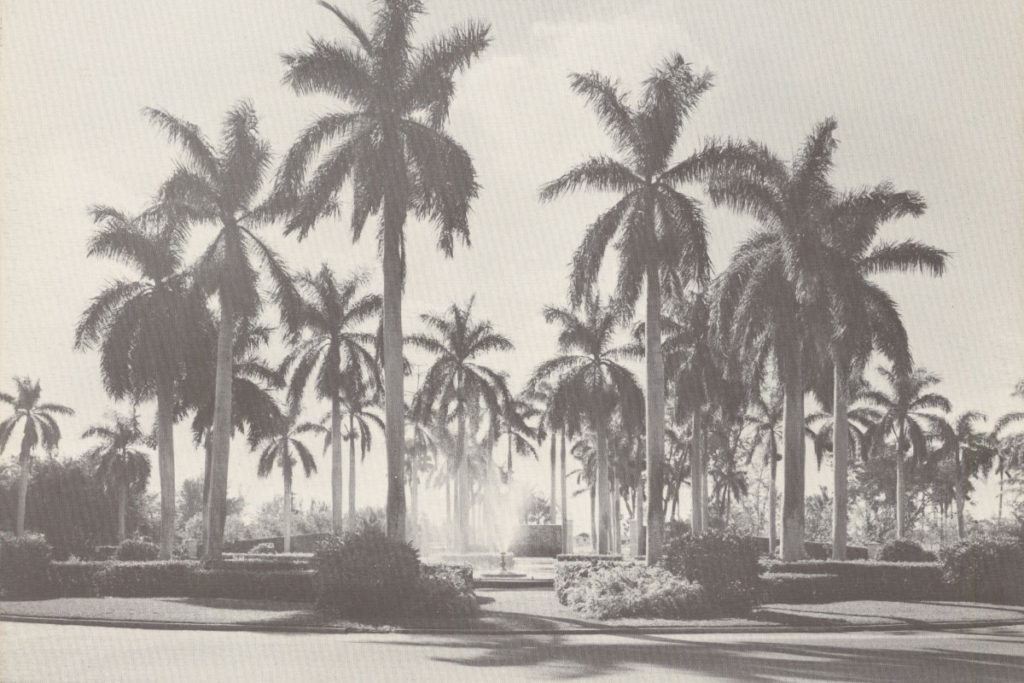 In developing Royal Palm Yacht & Country Club the canals were dredged early, with the muck and sludge used as fill for roads and lots. An old-time aerial photo of Royal Palm as the development was getting underway reveals the then stark barrenness of the area. Canals show as black gashes in the sand and scrub. Roads were incomplete.

Here and there were the beginning of new homes, widely separated and looking like a western prairie settlement. Hard now to make the mental transposition from this solitary sight to the green, the trees and flowers, and beautifully landscaped homes on winding roads that feature Royal Palm Yacht & Country Club today. 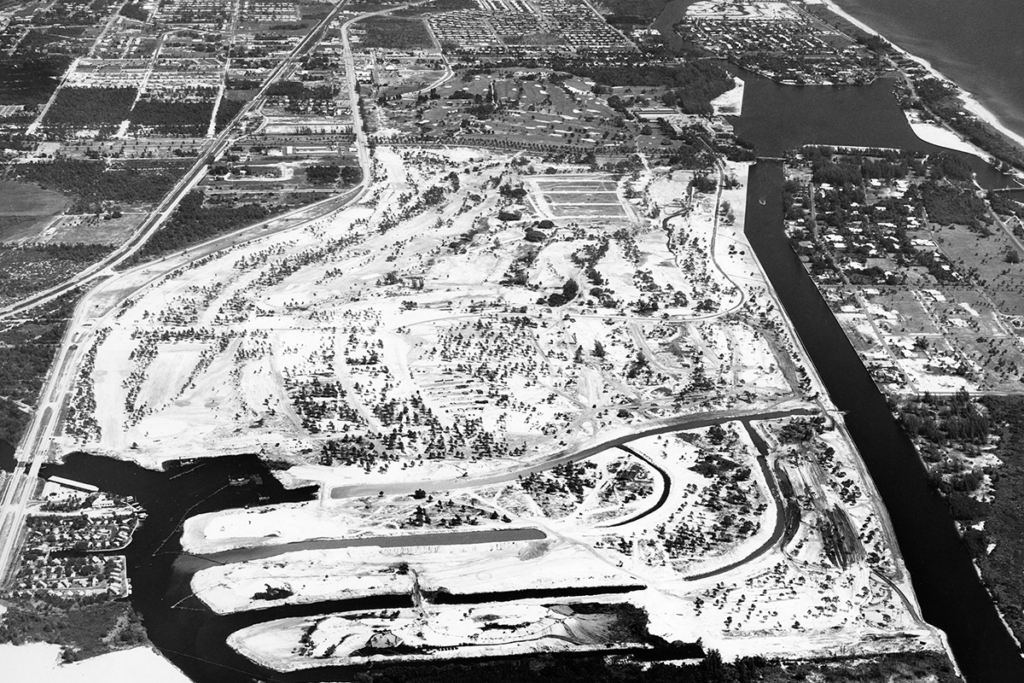 Royal Palm Yacht & Country Club derived its name from the statuesque Royal Palms bordering Camino Real; the Club’s Blue and Gold colors are from the color theme of early Arvida sales brochures and advertising. These contained such phrases as “Florida’s most desirable home-sites”… “Where contentment knows no bounds”… “The most desirable residential address in Florida”… “Quiet and unpretentious elegance”. Golf, yachting, tennis and the nearby attractions of polo and deep sea fishing were cited.

The first home in Royal Palm Yacht & Country Club was owned by members Mr. and Mrs. Lunsford T. Nuckols of Greenbrier, W. Va., and Richmond, Va., at 2148 Silver Palm Road, West. It was reported completed in the January 1960 issue of the Royal Palm Reporter. Mr. Nuckols was a retired Chief Engineer of the Chesapeake and Ohio Railroad. The winning bid to build the Golf Course, designed by Robert Trent Jones, was $368,075. It was submitted by C.T. Stockton, Inc. of Hialeah Gardens. The construction work was completed in October 1959. The first nine holes were put in play February 1, 1960, and the entire 18 in mid-April. Sam Snead was named, Royal Palm’s Golf Pro dividing his time between Royal Palm Yacht & Country Club and the Boca Raton Hotel and Club. Some members kidded him as being the “Lot Salesman Pro”. 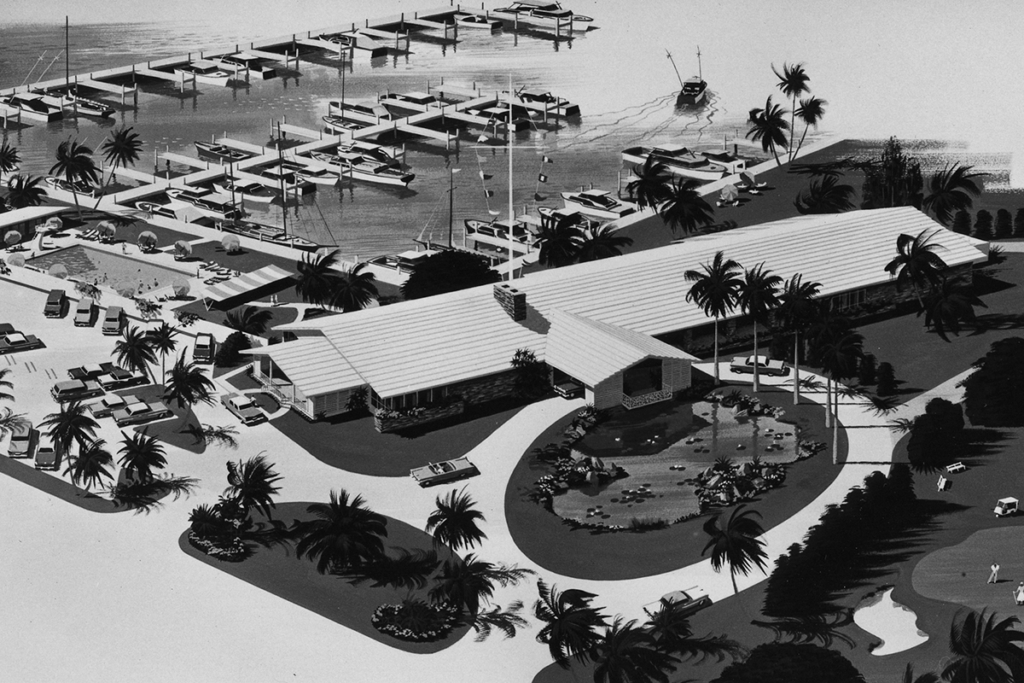 Then the most modern Marina piers and docks were contracted for by Lyons-troup, In. for a cost of $108,000. The pool was completed in June 1960.

Another longtime Arvida tradition is the Showcase of Homes, which is held annually in March to showcase the community as well as homes currently for sale. This 60-year tradition has been hosted by David W. Roberts for over 25 years! 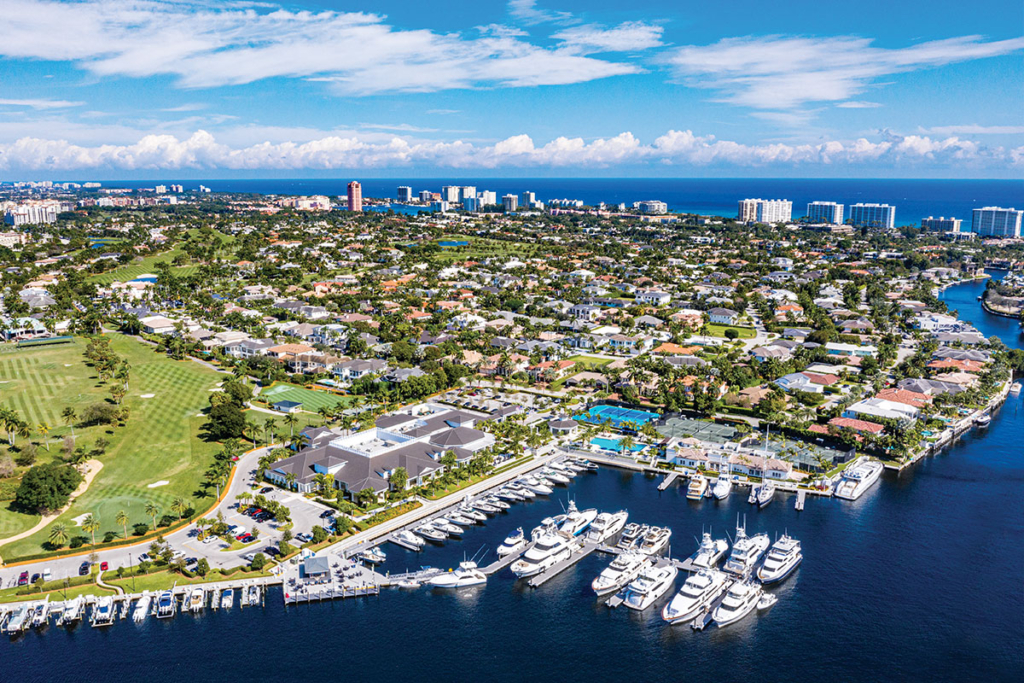 Today, Royal Palm Yacht and Country Club has evolved and grown along with Boca Raton. Whether you are looking for a great investment or quality of life, Royal Palm offers both, that is why it has remained South Florida’s most sought-after community for over 60 years. 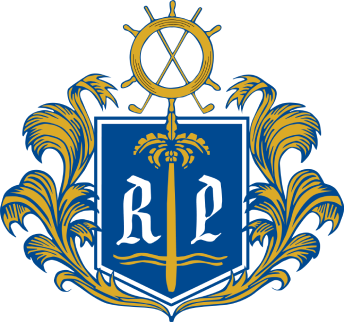